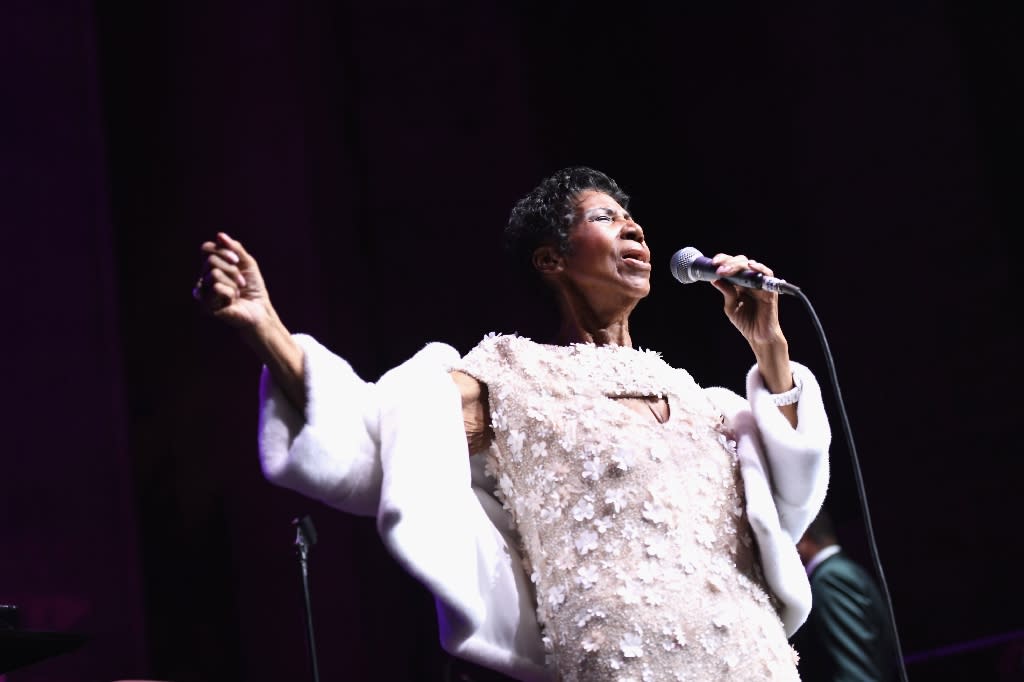 Aretha Franklin, the undisputed Queen of Soul, died Thursday at her Detroit home, the Associated Press reports, surrounded by family and friends. She had been battling various undisclosed illnesses for years, and, in recent weeks, was receiving hospice care. Franklin was 76.

During the tribute to singer/songwriter Carole King at the 2015 Kennedy Center Honors, Ms. Franklin brought down the house with her live performance of King’s “(You Make Me Feel Like) A Natural Woman” (composed in 1967 with King’s then-husband Gerry Goffin and Atlantic Records veep Jerry Wexler). Watch King’s surprised reaction as Franklin begins playing the piano; and notice how President Barack Obama is moved to tears just a few bars into the song.

Celebrity tributes to the Queen of Soul:

“Sometimes all you need is to hear the voice of Aretha Franklin to know there is a God.” ~ Andy Kim

“[Aretha Franklin] was one of those people who opened her mouth and out came brilliance.” ~ James Taylor

Let’s all take a moment to give thanks for the beautiful life of Aretha Franklin, the Queen of our souls, who inspired us all for many many years. She will be missed but the memory of her greatness as a musician and a fine human being will live with us forever. Love Paul pic.twitter.com/jW4Gpwfdts

What a life. What a legacy!
So much love, respect and gratitude.
R.I.P. @ArethaFranklin https://t.co/400K1U5IHI

This photo was taken in 2012 when Aretha & I performed at a tribute celebration for our friend Marvin Hamlisch. It’s difficult to conceive of a world without her. Not only was she a uniquely brilliant singer,but her commitment to civil rights made an indelible impact on the world pic.twitter.com/Px9zVB90MM

Aretha, you lifted our hearts with your incomparable gifts, RIP, your party will never be over. pic.twitter.com/Zi2xTAVyBw

Sometimes all you need is to hear the voice of Aretha Franklin to know there is a God.
Babe Ruth, Elvis, Aretha chose this day to say Good-Bye. pic.twitter.com/ILbfUkpOPS

I’m very sad to hear about Aretha Franklin passing. She was one of the greatest and most emotional singers. I used to love listening to her in the sixties but her music is timeless. Love & Mercy to Aretha’s family and friends. pic.twitter.com/fFVKyjxIXT

The world lost a superstar and a Grand Dame today.Where would we be today without RESPECT? Aretha conveyed a message to women of all races and cultures, that they were to be RESPECTED! This timeless message echoes loudly today just as it did many years ago. R.I.P. Queen Aretha pic.twitter.com/p92cssFCIS

I will forever cherish the moments I spent in your presence. Your indelible impact was earned not only by your incomparable voice but by your bigger than life personality, wit and humor. I say a BIG prayer for you. You will forever have all our RESPECT. Love, Mariah ♥️ pic.twitter.com/97qk0J64rO

Her voice; her presence; her style
No one did it better
Truly the Queen of Soul
I will miss you!@ArethaFranklin #QueenOfSoul pic.twitter.com/Gw5XEhsxjH

It’s a sad day but what a glorious lady. Her voice says it all! pic.twitter.com/6B6bQ8VOgX

"…To me, @ArethaFranklin was really the top, the best. She was one of those people who opened her mouth and out came brilliance." ~ James Taylor#ArethaFranklin #QueenOfSoul pic.twitter.com/ItMyJYBbhk

Some of my fondest memories were working in the studio next to The Queen of Soul at the Record Plant in the 70s. She said "You sing pretty good Moneyman, but I gotta fatten you up!" I loved Aretha because she was so genuine and nice to me. See you on the other side.
-E$ pic.twitter.com/OpEMaz0No6

The Queen of Soul. What an impact, what a legacy. How lucky are we all to have lived during the time of Aretha. Her music will live on forever! 🎙 #Respect #RIP #ArethaFranklin pic.twitter.com/yjcSGD4bJ3

Aretha is irreplacable.She is one of kind.And I certainly will never forget the performance that we did together on the Mike Douglas Show or the numerous times I have run into her at various events.She was so talented it was ridiculous – so inspirational! I will miss her dearly.

Gone, but never to be forgotten. R.I.P. 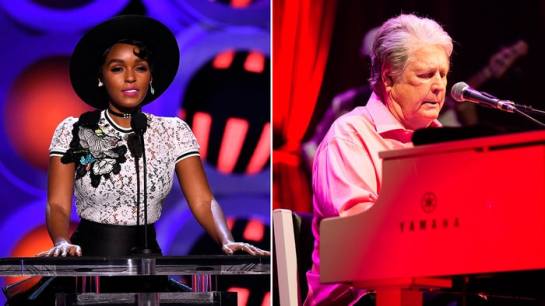 Janelle Monáe recruited stars from the worlds of indie (Grimes) and hip-hop (Pharrell) to contribute to her new album Dirty Computer. But the very first collaborator that appears on the LP is none other than Brian Wilson of the Beach Boys.

“Do you know how much of an honor it is to have him on [the title track]?” she tells Rolling Stone. “I am such a Beach Boys fan.”

Two of the original members of Jefferson Airplane—Paul Kantner and Signe Toly Anderson—passed away on January 28, 2016. Both were 74 years old.

Anderson, the female co-lead singer prior to Grace Slick, is on the left in the photo above; Kantner is second from right.

Jefferson Airplane was founded in 1965 by Marty Balin (third from left in photo) along with Kantner, as the house band for Balin’s San Francisco club, the Matrix. The group made its first public appearance as Jefferson Airplane at the Matrix on 13 August 1965. Anderson left the group in October of 1966; Kantner was to remain with the band, which evolved into Jefferson Starship in 1974, until his passing.

Above photo by KRLA/Beat Publications-page 2 Photo by Chuck Boyd of Beat. The newspaper was produced for KRLA Radio, Los Angeles, in the mid-1960s. 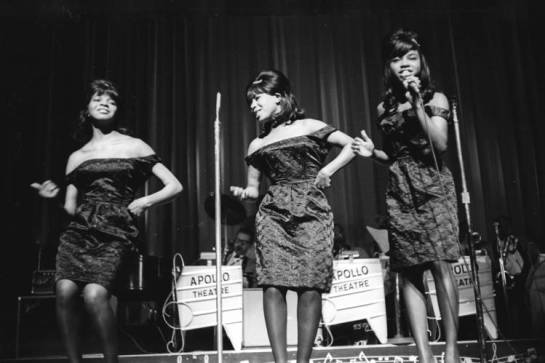 When Jeff Barry and Ellie Greenwich wrote “Chapel of Love” with producer Phil Spector in early 1963, Darlene Love was first to record it. Unhappy with the result, Mr. Spector shelved it. Next Mr. Spector had the Ronettes take a shot in early 1964, but their version wasn’t released either. So Mr. Barry and Ms. Greenwich offered the song to producers Jerry Leiber and Mike Stoller.

The timing was perfect. Messrs. Leiber and Stoller had just auditioned a vocal trio from New Orleans that included two sisters—Barbara and Rosa Hawkins—and their cousin, Joan Johnson. Renamed the Dixie Cups by Mr. Stoller, their gleeful rendition of “Chapel of Love” was released in April 1964. In June, the single was No. 1 on Billboard’s pop chart for three weeks straight, dislodging “Love Me Do” by the Beatles.

The Dixie Cups and ‘Chapel of Love’ – WSJ.

Singer-songwriter Lesley Gore, who scored a massive hit in 1963 with “It’s My Party,” died Monday. She was 68.

Gore’s partner of 33 years, Lois Sasson, told the Associated Press that she died of cancer at the New York-Presbyterian Hospital in Manhattan. 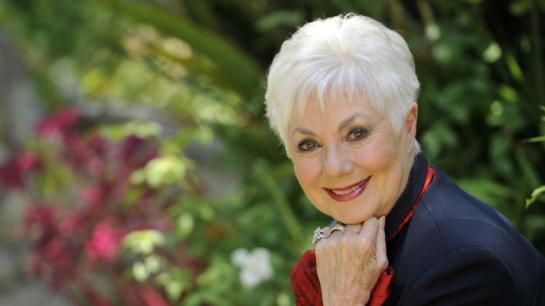 Inspired by a former president, Shirley Jones can’t wait to jump into her birthday plans.

“That’s something I wanted to do all my life,” Jones said Friday. The inspiration to try comes from former President George H.W. Bush’s jumps on several birthdays, including when he turned 85 in 2009.

Read more by clicking the link below:

Happy birthday to a lovely, classy lady who’s been on stage, screen & TV but who babyboomers probably know best as Mama Partridge on The Partridge Family. Wishing Shirley Jones all the best on her 80th!

Yoko Ono compares being blamed for The Beatles breakup to being accused of murder.

“Not being appreciated for 40 years or something … It feels like I was accused of something that I didn’t do, which was breaking up The Beatles,” she tells Elvis Mitchell in Interview magazine. “That was like being somebody who is in prison without having done anything wrong. It’s like you’re accused of murder and you’re in prison and you can’t get out. That’s why I finally came to the conclusion to use that big energy of hatred that was coming to me and turn it around into love.”

Yoko Ono says being blamed for Beatles breakup is like being accused of murder – NY Daily News.

For years she’s been seen as the main barrier to an Abba reunion.

Now Agnetha Faltskog has revealed that the Swedish group are considering reforming more than 30 years after their acrimonious split.

The 63-year-old said they are thinking about marking the 40th anniversary of their first big hit Waterloo next year with a concert.

‘Of course it’s something we’re thinking about,’ she told German newspaper Welt am Sonntag.

Annette Funicello, who became a child star as a cute-as-a-button Mouseketeer on “The Mickey Mouse Club” in the 1950s, ruled among baby boomers, who tuned in every weekday afternoon to watch her on their flickering black-and-white television sets.

Then they shed their mouse ears, as Annette did when she teamed up with Frankie Avalon during the ’60s in a string of frothy, fun-in-the-sun movies with titles like “Beach Blanket Bingo” and “How to Stuff a Wild Bikini.”

Decades later, she endeared herself to baby boomers all over again after she announced in 1992 that she had multiple sclerosis and began grappling with the slow, degenerative effects with remarkably good cheer and faith.

Funicello died on Monday at Mercy Southwest Hospital in Bakersfield, Calif., of complications from MS, the Walt Disney Co. said. She was 70 and had dropped from public view years ago.

“She really had a tough existence,” Avalon told The Associated Press. “It’s like losing a family member. I’m devastated but I’m not surprised.”

via Girl next door Annette Funicello dies at 70 – Yahoo! News.

Bass died Wednesday night at a St. Louis hospice of complications from a heart attack suffered three weeks ago, her daughter, Neuka Mitchell, said. Bass had also suffered a series of strokes over the past seven years.

Obit and guestbook for Fontella Bass on Legacy.com