Cynthia Lennon, who married John Lennon when he was a struggling musician and was there when he rose to fame with the Beatles, died Wednesday, according to a post on the website of her son, Julian.

“Cynthia Lennon passed away today at her home in Mallorca, Spain, following a short but brave battle with cancer. Her son Julian Lennon was at her bedside throughout,” his website says. “The family are thankful for your prayers. Please respect their privacy at this difficult time.”

On June 1st, 1967, the Beatles released Sgt. Pepper’s Lonely Hearts Club Band, boosting the sales of vintage military uniforms and further cementing their status as the biggest rock group in the world. Two weeks later, they started work on their next omnipresent musical event: participating in the Our World TV show on June 25th, employing Earth’s newly constructed satellite technology to deliver a live global broadcast from locales as far-flung as “Takamatsu and Tunis.”

The Beatles agreed to perform a new song as the representatives of the United Kingdom. “It was the first worldwide satellite broadcast ever,” Ringo Starr said years later. “It’s a standard thing that people do now, but then, when we did it, it was a first. That was exciting – we were doing a lot of firsts.”

via The Beatles’ ‘All You Need Is Love’: A Minute-by-Minute Breakdown | Rolling Stone.

This February 7 marks 50 years since The Beatles first came to America. A thousand tributes will tell you what happened. But how and why did it happen the way it did? What was America really like then, culturally and socially, that allowed the group to strike such a deep nerve? And what was it about The Beatles themselves—their backgrounds, their style, and of course their music—that made them so unlike anything Americans had seen before?

In his new e-book Yeah! Yeah! Yeah!: The Beatles and America, Then and Now, Michael Tomasky explains the group’s impact in the context of the times in a richly detailed, often surprising, I-never-knew-that! account of why they became the phenomenon they did. Kurt Andersen says of Yeah! Yeah! Yeah!: “This book was a revelation. No one has more lucidly and entertainingly distilled the whys and hows and look and feel of the moment the Sixties began.”

Continue reading Part One via A Revolution, With Guitars: How The Beatles Changed Everything – The Daily Beast.

Part Two – Before the Earthquake Hit: When The Beatles Landed in America

Part Three – ‘You’ve Got to Be Kidding’: Why Adults Dismissed The Beatles in 1964

Part Four – Was The Beatles’ Music Really That Unique? Yeah, It Totally Was

Yoko Ono compares being blamed for The Beatles breakup to being accused of murder.

“Not being appreciated for 40 years or something … It feels like I was accused of something that I didn’t do, which was breaking up The Beatles,” she tells Elvis Mitchell in Interview magazine. “That was like being somebody who is in prison without having done anything wrong. It’s like you’re accused of murder and you’re in prison and you can’t get out. That’s why I finally came to the conclusion to use that big energy of hatred that was coming to me and turn it around into love.”

Yoko Ono says being blamed for Beatles breakup is like being accused of murder – NY Daily News. 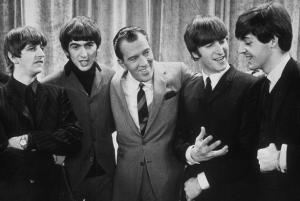